The Pride of Baltimore 8.5 inch

A beautiful Schooner Ship In Bottle. She is in a pint bottle approximately 8 1/2 inches. With stand and nameplate, of course the nameplate can be modified to your liking extra charge of 19.95, do you need to contact the captain directly about the main plates. Meanwhile here’s a little history

Commissioned on May 1, 1977 by the 44th Mayor of Baltimore, William Donald Schaefer, in an elaborate public ceremony in the historic Inner Harbor watched by thousands of Baltimoreans and Marylanders, she spent nine years at sea logging over 150,000 miles, equivalent to six times around the globe. On May 14, 1986, the first Pride of Baltimore was lost at sea in the Caribbean Sea, and her captain and three of the crew died. 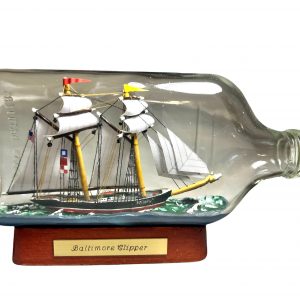